Now in its 32nd year, Recovery Month celebrates the gains made by those in recovery, just as we celebrate improvements made by those who are managing other health conditions such…

By Barbara Nicholson-Brown     This month, people from all walks of life in recovery celebrate their successes across the nation. (www.samhsa.gov/recovery-month) Sharing our stories connects us to each other…

By Katie Zezima The acting director of the Drug Enforcement Administration said a database that monitors the flow of powerful prescription painkillers from manufacturer to distribution point was compiled manually... 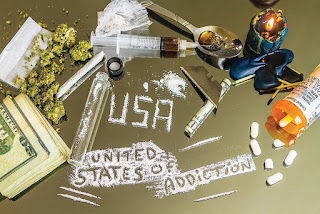 The acting director of the Drug Enforcement Administration said a database that monitors the flow of powerful prescription painkillers from manufacturer to distribution point was compiled manually during the height of the opioid crisis, making it a reactive, not proactive, tool.

The information contained in the drug-reporting database, known as ARCOS, is key to figuring out how many painkillers were distributed to pharmacies across the country from around 2006 to 2010. The data is confidential, but some information that has been released and analyzed is staggering: In two instances, millions of pills were shipped to pharmacies in tiny West Virginia towns.

Members of the House Energy and Commerce Committee, who spent two hours aggressively questioning acting DEA director Robert W. Patterson in Washington, wanted to know how so many pills flowed freely, creating conditions for the opioid crisis, and why, they said, the DEA hasn’t been forthcoming with information about how it handled opioids.

“Your agency doesn’t appear to be willing to aggressively try to help us solve, or at least deal with, this crisis,” Rep. Joe Barton (R-Tex.) said. Time, he told Patterson, is of the essence. “You just remember 80 people a day are dying because of legal prescription drugs. Remember that.”
Patterson, who has been acting director since October, said the agency has modernized how it uses the ARCOS data in recent years. It is now computerized, and the DEA has the ability to paint a fuller picture of how many pills are being shipped by also analyzing data from state prescription-drug-monitoring programs and the Department of Health and Human Services. Drug distributors are responsible for reporting their data to the DEA.

Patterson said the modernization of the database has allowed it to be used in a “much more proactive manner” than in the past. He also said that some anomalies cannot be spotted using the database alone — it needs to be employed in concert with other data.
“I can say repeatedly in ’08, ’09, ’10, we did not use this data in the way that we are now using it, and I think that’s the key,” Patterson said. “Where we fell short, we’ll take responsibility for it.”
When asked, Patterson said that the same thing would not happen today.
“What we wish to do . . . is stop public harm,” he said.

Committee members expressed extreme frustration with the DEA, claiming that the agency dragged its feet in turning over documents and redacted many of those it did give up.
“Your agency needs to be turned upside down,” Rep. Chris Collins (R-N.Y.) said. “There is no doubt there is an abject failure in the DEA going back 10 years.”

As Rep. Raul Ruiz (D-Calif.), a medical doctor, said of the agency: “You screwed up.”
The agency also questioned Patterson as to why there was a decrease in orders preventing pharmacies or doctors that were suspected of rogue prescribing from dispensing opioids. Patterson said it was, in some cases, because U.S. attorneys asked that they complete criminal cases before shutting down the pharmacies. The names and the locations of the prosecutors were not specified.

“People continued to die, die during this period,” Rep. Greg Walden (R-Ore.) said.
The testimony came during a week when Washington is focused on the opioid crisis. The Energy and Commerce Committee will hear more than 20 bills on opioids this week. On Monday, President Trump laid out his plan to solve the opioid crisis, which was filled with tough talk but few details on how he plans to carry it out.

Trump’s plan includes executing some drug dealers, while also pledging to hold pharmaceutical companies accountable for their role in fostering addiction. He said he wants to cut the number of opioid prescriptions by one-third nationwide but did not lay out a blueprint for getting there.

When Trump called for eliminating drug dealers, he said he wants to “get tough” on them, an approach that has alarmed some public-health experts.
Trump’s administration still has not filled numerous vacant positions that deal with the opioid crisis. Patterson is the DEA’s acting director. Trump named Jim Carroll, who worked in the White House Counsel’s Office, to be director of the Office of National Drug Control Policy, but he is only in an acting capacity and his nomination has not been sent to the Senate.

Katie Zezima is a national correspondent covering drugs, guns, gambling and vice in America. She covered the 2016 election and the Obama White House for The Washington Post.  Follow @katiezez (Source: Partnership for Drug Free)

1.
Community Bridges Inc. Celebrates 40 Years of Maintaining The Dignity of Human Life
2.
Recovery is for Everyone. Every Person. Every Family. Every Community.
3.
It’s All About You!
4.
And though perhaps he came to scoff, he may remain to pray

In Memory of a Recovery Warrior

SYNCHRONI-CITY is the Capital of the State of Grace

Recovery is for Everyone. Every Person. Every Family. Every Community.