Becoming Fearless with the Help of Al-Anon

The Mother of a Claudia Black Young Adult Center Patient shares her hope. As my daughter does her recovery work from drug and alcohol addiction and anxiety, I too work...

The Mother of a Claudia Black Young Adult Center Patient shares her hope.

As my daughter does her recovery work from drug and alcohol addiction and anxiety, I too work my recovery through Al-Anon.
I won’t go into details of how my daughter and I both came to this point because I’m guessing many of you are already familiar with the scenario — failing grades, arrests, court appearances, isolation, detachment, and on and on.
I spent many fear-filled nights of insanity sleeping with my phone next to me waiting for that call parents fear most… 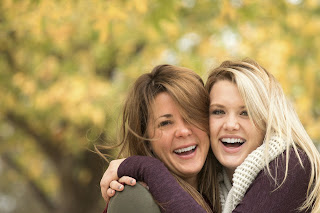 Was she in jail again? Was she in an accident? Did she overdose? Was she dead? I received one of those calls.

My daughter was in such a bad place that she couldn’t even finish her last semester of college.
Finally, I gave in to my fear, checked my ego, and accepted the help of many friends and family. With mixed emotions of anger, pain, shame, and guilt, I put aside my resentment of being forced to face my daughter’s issues, and on a Sunday morning her intervention team showed up at her college rental house. To say things didn’t go as planned would be an understatement. The well thought out plan of getting her to agree to go to treatment failed; she would not go.
I left the intervention feeling defeated and numb. What now? As hard as it was, I tried tough love and cut her cell phone service off and thus lost total communication with her. However, she still had our family dog, Bailey, at the rental house.
Little did I know that Bailey would be the link to finally getting my daughter into treatment. Late one night I received a call from my daughter’s roommates; Bailey was sick and they couldn’t get a hold of my daughter (no surprise). I went to pick up Bailey and had an enlightening heart-to-heart conversation with the roommates who were just as concerned about my daughter as I was. This unfortunate course of events (Bailey rebounded) helped me to formulate a plan to convince my daughter she needed treatment.
Four weeks following the unsuccessful intervention, my daughter was on a plane to treatment. She was fortunate to have some of the best treatment service available and after five months, a few relapses, and with the grace of God, she is now home.
While my daughter was in treatment I knew I had to do something for myself, so I found an Al-Anon group and started going. I knew that what I had been doing in relation to my daughter wasn’t working, and my hope was that through Al-Anon, I would be able to find new tools to help me get through these new challenges I was facing.
I’ve learned so much from the Al-Anon fellowship and hearing the experience, strength, and hope of others dealing with the disease of addiction. By working the 12 Steps through Al-Anon I have learned that I am powerless over the disease of addiction; I didn’t cause it, I can’t control it, and I can’t cure it. With this new knowledge, I fearlessly let go of the control I so tightly held onto in the hope of changing my daughter. Fear still creeps in, and when it does, I have learned to let go and let God. It’s one day at a time but I am committed to not letting fear define me, my life or my choices.
Reprinted with permission The Meadows.
The Claudia Black Young Adult Center is a groundbreaking, intensive, and experientially based inpatient treatment program for young adults ages 18 to 26. Our goal is to help restore hope, healing and health to young adults who have lost focus and who are unable to embrace independent lives due to unresolved trauma, addictions or other issues, including unsuccessful previous treatment.
For more information visit www.themeadows.com or call 866.932.2036
Tweet
Share
Pin
Share
0 Shares

Another Layer of Denial: Children

Why Millennials are Failing to Launch