Curbing Opioid Addiction Through Executive Order
On October 24, 2016, Governor Doug Ducey marked the kickoff of Red Ribbon Week by signing an executive order that limits the first fill of addictive prescription opioids to 7 days in all cases where the state is the payer.
The measure limits all fills for children, except for those with cancer, chronic disease and traumatic injury. 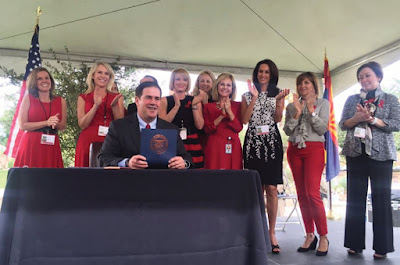 “This action is essential to help prevent future drug addictions,” said Governor Ducey. “The numbers are staggering. In 2015, 401 people in Arizona – more than 1 a day – died from prescription opioid overdoses. In 2013 there were enough prescription pain medications dispensed to medicate every adult in Arizona around the clock for two weeks.

“These large prescriptions of highly addictive substances are incredibly dangerous, and we have to take action now. By limiting the fills of prescriptions for all state health plans, we hope to encourage private companies to consider similar action.”
Ducey also noted that children in particular are susceptible to addiction.
“We’ve got to do more to protect our kids from these addictive medications. I recently learned about a young boy who had his wisdom teeth removed and was sent home with a 30 day supply of opioids,” said Ducey. “This has to stop. These large prescriptions of highly addictive substances are terribly harmful for everyone, but especially for our young people.” (Source: http://azgovernor.gov)
Tweet
Share
Pin
Share
0 Shares